In May of 2017 in Orlando, Florida, MegaCon held its annual convention for geeks and geekettes around the country. The convention was stocked with art, celebrities and cosplayers from every fandom. The event was especially memorable for some, as it was Stan Lee’s (creator of Spider-Man, Thor and Iron Man, among many others) last ever appearance in Florida. While most find it incredible that Lee still travels the world to meet his comic book fans at the ripe age of 94, Lee decided to step it up a notch by surprising his #Deadpoolfans with a special photo op.

It’s not uncommon at these conventions for cosplayers to organize character meetups for photo opportunities. And who wouldn’t want to miss the chance to see 50 Harley Quinns or Spider-Mans gathered in one place? The Deadpool meetup is organized every MegaCon by Orlando Cosplay owner Marty Grifka. He told us about previous attempts to get Lee to make a special appearance for the meetup, but nothing seem to work before:

The clothing shop in question is Red Chapter Clothing. The owner of the shop, Mark Palmer, told us that he has ties with Marvel ever since his company teamed up with them to make co-branded MARVEL ambigram shirts. After this partnership, they got in the loop with Stan Lee Collectibles and travel with Lee and his team to conventions like MegaCon.

When Palmer and his team saw the Deadpool flash mob they were, like most of the convention-goers, entranced and amused by the conga line of Deadpools. So, they invited them over to their booth, which so happened to be right next to Lee’s autograph zone. Mark Palmer said:

“One of my business partners, Michael, said, ‘Hey, how cool would it be to get a picture with all the Deadpools at our booth?” 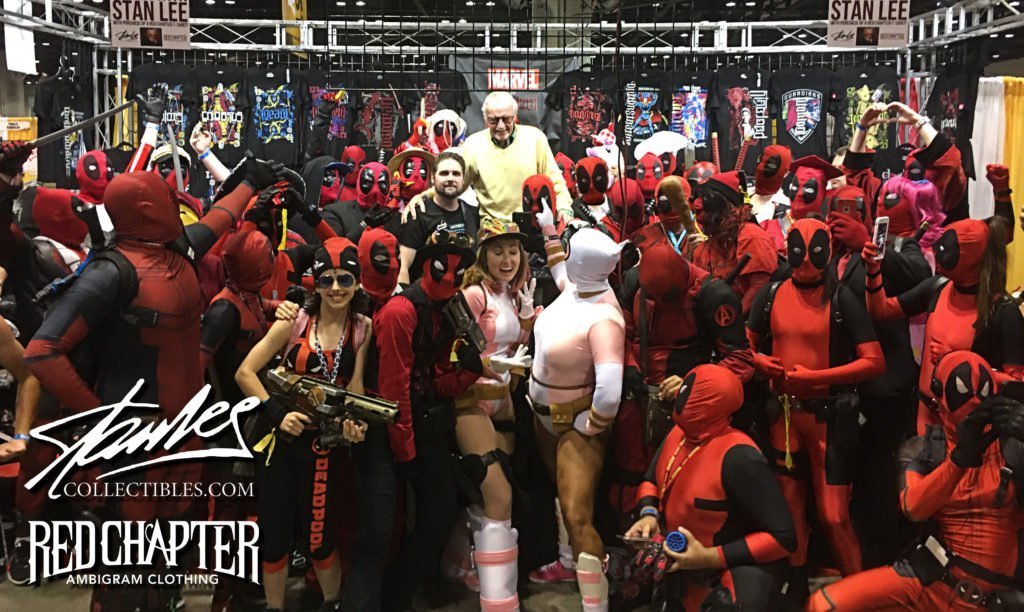 They went on to direct the Deadpool conga line (video footage of that below) to gather around for a group photo with Red Chapter. That’s when Max Anderson, the owner of Stan Lee Collectibles, came up to Palmer to witness the Deadpool overkill. Palmer then told us about the moment they had all been waiting for:

“Max thought for a second and then said, ‘Keep them [Deadpools] there for two minutes. I’ll be right back.’ And I went, ‘No way…Are you going to get Stan Lee?'”

Word got out about Lee’s possible appearance and they somehow managed to get the plethora of Deadpool cosplayers to act on their best behavior while they awaited the verdict (how uncharacteristic of Deadpool).

Sure enough, within minutes Anderson returned with the father of Marvel. Lee actually stepped away from his signing to take pictures with the Deadpool cosplayers. They put a stepladder in the middle of the sea of Deadpools, and Stan climbed up and smiled alongside his star-struck fans for one unforgettable photograph.

There were about a hundred Deadpool cosplayers involved in the meetup/flash mob. One fan in particular, Jason of Make ‘Em Laugh Films (MELF), recorded a video of the event. In the aftermath he recalled:

“The general reaction when Stan Lee came out was shock, awe, and amazement from the Deadpool cosplayers and bystanders alike. You could feel how grateful everyone was.”

END_OF_DOCUMENT_TOKEN_TO_BE_REPLACED

END_OF_DOCUMENT_TOKEN_TO_BE_REPLACED
We use cookies on our website to give you the most relevant experience by remembering your preferences and repeat visits. By clicking “Accept All”, you consent to the use of ALL the cookies. However, you may visit "Cookie Settings" to provide a controlled consent.
Cookie SettingsAccept Allll The Cookies 🍪
Manage consent