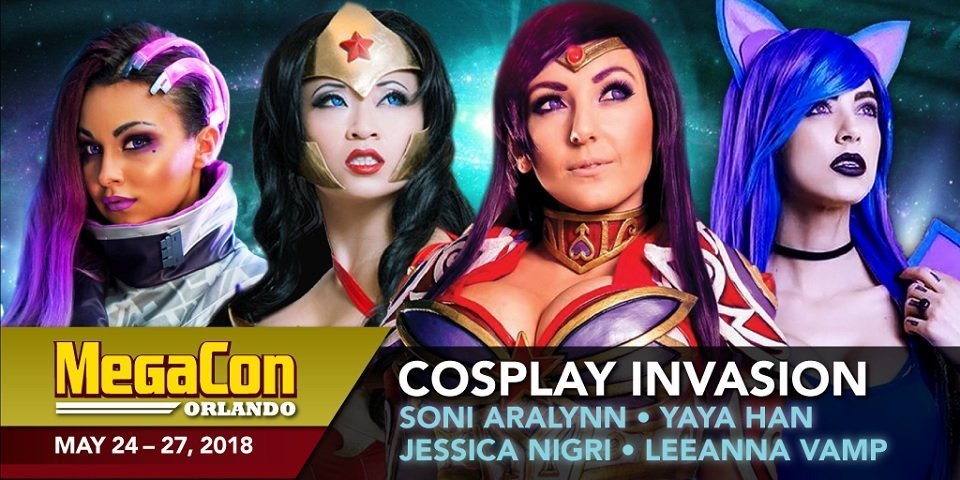 For those of you who may be new to conventions, one of the many draws is the chance to meet some of your favorite celebrities. From Avengers like Chris Evans to Disney Princesses such as Jodi Benson, conventions present the one-of-a-kind opportunity to meet, chat, and take photos with your idols. But not only that, conventions also book cosplayers in what is typically called Cosplay Alley. Here, you get the the same chance to meet your cosplay idols and get autographs and selfies. And this year, MegaCon did what no other convention has done before: they created the ultimate cosplay lineup.

Whether you’re a big or small time cosplayer, everyone has the opportunity to be a guest in MegaCon’s Cosplay Alley. It simply requires an application and MegaCon filters through those to book anyone from highly requested to up-and-coming cosplay guests. And MegaCon absolutely hit the nail on the head with this year’s cosplay lineup. Here are just a few of the cosplayers convention go-ers have the opportunity to meet at MegaCon 2018:

This cosplayer’s set up is a production. Guests can get their picture taken at their zombie booth with Rick Grimes (Cecil), Darlyl Dixon (@richarddixoncosplay) and Negan (cosplayer, Darren Tilson) . Merchandise is also available.

Cecil is a Rick Grimes impersonator from the AMC show The Walking Dead. Find him on Instagram here!

The Frost Sisters made their way into the cosplay realm back in 2014 when Anna Faith‘s stunning resemblance to Frozen‘s Elsa blew up on the internet. Today, Anna and her sister, Lexie, are well known for their convention appearance’s as the Frost Sisters.

The girls will be at MegaCon Orlando this year with two separate photo opportunities, which includes a brand new IT set-up! Make sure you check out Anna and Lexie’s MegaCon lineup on Instagram!

Danielle is a booming cosplayer and Twitch partner, who is known for her impressive gaming cosplays. Actually, her cosplay lineup falls into just about every fandom you can think of. This bombshell frequently works with Florida photographer, David Love, which really helps bring her fantasy characters to life.

Danielle has worked alongside other note-able cosplayers such as Karli Woods, Vamp, and Jessica Nigri, who will also being attending MegaCon Orlando this year. Make sure you follow Danielle on Instagram here!

Joanie is dubbed the Nerd Girl Next door by her fans. Some of her most requested cosplays include her version of Lara Croft, Vampirella, and Rey from Star Wars.

Joanie became a glamour model after her appearance at the Star Trek convention in 2010. Her Facebook describes her as “a major bookworm and computer geek, but what tops the list for this girl is calling herself a “Trekkie”. She is wonderfully approachable and a down to earth girl who loves to meet new friends. So don’t be shy, come up and say hi and nerd out with her at this con!”

LeAnna Vamp a.k.a the Ghoul of your Dreams is a proclaimed horror fanatic and cosplayer.  She has a knack for turning dark and ominous characters into glamorous cosplays. She has cosplayed as Lydia from Beetlejuice, Bride of Chucky, and even a Vamp Sith.

Vamp is also an actress and a host for conventions such as Walker Stalker Con. She will be taking over MegaCon’s Instagram so be sure to follow to see where all the fun is happening!

Alyson is well-known for her lineup of insanely impressive cosplay transformations. It can be Widowmaker from Overwatch or Gal Gadot’s version of Wonder Woman and Alyson can expertly transform herself to look identical to the character. She is also known for being savvy and creative with her cosplays, with each of them costing under $100.

Alyson is a reoccurring guest for MegaCon, but you can bet that she will have a noticeable amount of admiring cosplayers lining up to meet her!  Make sure to follow her on Instagram to see which one of her mind-blowing cosplays she will be bringing to the convention!

Yaya Han is another staple within the community. She’s not only a successful seamstress and foam-smith, but a booming businesswoman as well. Yaya is one of the few who have been able to take her passion for cosplay and turn it into a thriving business. She manages partnerships with stores such as JoAnn’s who sell Yaya’s own line of self-titled cosplay fabrics.

Yaya will be in her own merchandise table in the Exhibit Hall at Booth 1080. She is also scheduled to host a couple of panels during MegaCon Orlando, such as How To Run A Cosplay Related Business (Sunday at 3 pm).

This was taken on a fuckin PHONE REEEEEEEE /throws canon6D Into the water/ COSTUME MADE FOR THE GROUP WE DID AT @calgaryexpo ! I THREW THIS PLUS THE AXE TOGETHER IN 3 days and there's a lot I want to fix on her but HEY SHE SERVED HER PURPOSE! Check out @vamp @itskarliwoods @danielledenicola and @soniaralynn VIKINGS

Perhaps the most well-known within the community, Jessica Nigri is the cherry on top of MegaCon Orlando’s ultimate cosplay lineup. This cosplayer can turn her cosplays from sexy to badass and rock them all. Jessica is known for being down-to-earth, fun, and relatable in a way that makes all cosplayers feel welcome in the community.

Jessica will be at MegaCon all four days and you can get your own photo opportunity with this iconic cosplayer at Epic Photo Booth A at various times during the weekend event.

Did you meet any of the guests in Cosplay Alley this year? Tag @cosplayandcoffeenews and share your stories of meeting your favorite cosplayers!

END_OF_DOCUMENT_TOKEN_TO_BE_REPLACED

END_OF_DOCUMENT_TOKEN_TO_BE_REPLACED
We use cookies on our website to give you the most relevant experience by remembering your preferences and repeat visits. By clicking “Accept All”, you consent to the use of ALL the cookies. However, you may visit "Cookie Settings" to provide a controlled consent.
Cookie SettingsAccept Allll The Cookies 🍪
Manage consent