15 Magical Cosplays From A Celebration of Harry Potter 2018 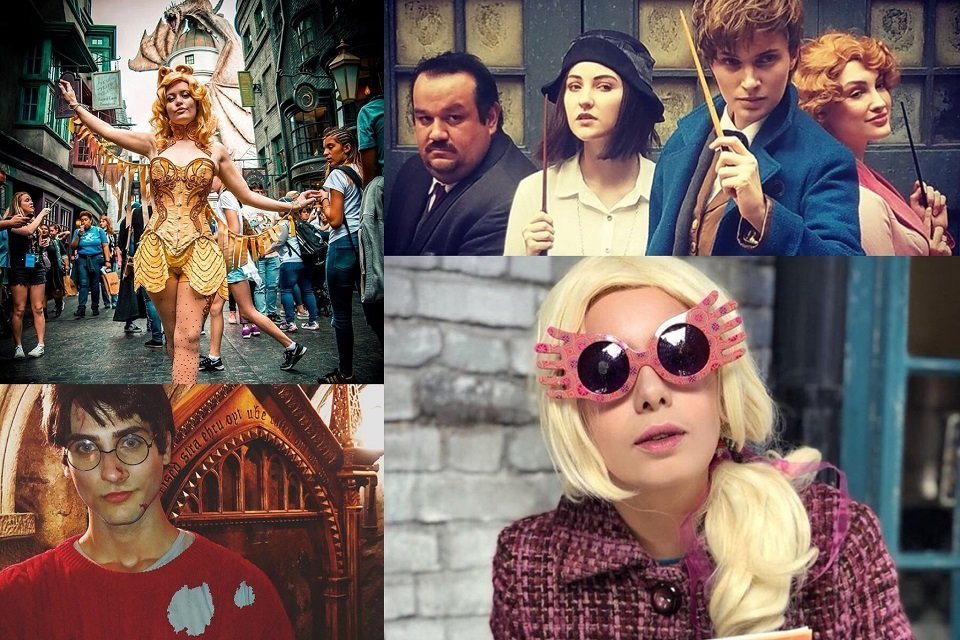 Every January, Harry Potter enthusiasts get the chance of a lifetime to attend Universal Orlando’s annual Celebration of Harry Potter event. Besides getting the chance to see actual props used in the films and checking out cool things like VR and Pottermore experiences at the Expo, there’s the cast Q&A and, of course, cosplays.

This is the one time of year that Universal allows full-out cosplays, and man, did I see some FANTASTIC ones. Queenie from Fantastic Beats seemed to be the most popular character this year, but it’s always great to see the Lunas, Harrys, and Rita Skeeters running about the Wizarding World of Harry Potter. So to give you a glimpse at just a handful of the incredible cosplayers that came to the event this year,  here are 15 magical cosplays from a Celebration of Harry Potter 2018:

One of the very first noticeable cosplays at this convention were the various Rita Skeeters scattered about. You have to admit– she’s kind of hard to miss. In this photo, @kutryb plays Rita Skeeter, who seems to be trying to get the latest scoop from a female Durmstrang student with her Quick Quotes Quill. Love it!

The Unbreakable Vow.  Is there any other kind? This cosplay group shot is a cryptic flashback to the first scene from Harry Potter and the Deathly Hallows film. Kudos to Tory Taylor, Eric Rhodes, and their friend (unlisted) for pulling off very convincing Bellatrix, Snape, and Narcissa Malfoy cosplays!

Okay, how genius is this? Not only is this a clever and unique Harry Potter cosplay interpretation, but Minxycosplaycreations looks absolutley stunning as the Snitch. This cosplay is a combination of corset, rhinestones, and intricate attention to detail, all of which can be seen on Jacqueline’s Instagram page. Universal also seemed taken with this unique cosplay, as they put her on the forefront for much of their advertising!

“Fawkes is a phoenix, Harry. Phoenixes burst into flame when it is time for them to die and are reborn from the ashes.”

But was Fawkes ever reborn to be so glamorous?? Unlikely. Here, Niky a.k.a @nikysama took one of monumental characters in Harry Potter and turned it into something  slightly more resemblant of what Fawkes symbolizes in this series: a beacon of hope.

all things considered, id say i make a surprisingly good ron if i do say so myself day 2 of celebration of harry potter went awesome! here are some of my favorite pictures we took with people today. it was a great day and we met some incredible people. heres to a good day three and then waiting for next year! (also i didnt take many pictures of day 1 and day 3 is yet to come but day 1 was hogwarts uniforms and day 3 is going to be the battle outfits!) ——– #celebrationofharrypotter #celebrationofharrypotter2018 #universalorlando #harrypotterworld #harrypottercosplay #hpcelebration

It’s been almost twenty years since I first read Harry Potter, and it still warms my heart to see younger generations still impacted by these books the way I was all those years ago. And not only that, but the magic of Harry Potter is still alive in the adults that read or watched the series growing up. This photo of @snckfrnk (Ron) and @snckdve (Harry) and their fellow Hagrid depicts this sentiment perfectly.

I’m not quite sure who this cosplayer is, but his rendition of the late Richard Harris from the first two Harry Potter films is just about the best Dumbledore cosplay I’ve seen. I’m sure many enjoyed Michael Gambon, who played Dumbledore in the remainder of the Harry Potter films, but Harris truly encapsulated the demeanor that was the Dumbledore that J.K. Rowling created.

Harry Potter and the Sorcerer’s Stone

This is the first adult Harry cosplay that I’ve seen that illustrates Harry Potter from the Sorcerer’s Stone film. And I have to say– it’s absolutely spot on. He actually looks like he came straight from the book cover! When @johnnythealchemist isn’t creating art, he’s “probably watching Harry Potter.” Which explains his attention to detail in this simple, yet superb, cosplay.

“So you're the guy with the case full of monsters, huh?”

Lights, camera, action! Is this actually Eddie Redmayne in disguise as his character Newt from Fantastic Beasts and Where to Find Them? You could have fooled me; Olen Humphries is a dead ringer for the Fantastic Beasts  actor. This seems to be his first cosplay post (at least recently), but I definitely encourage him to do more!

I’ve taken quite a few pics of the lovely people who immersed themselves in #acelebrationofharrypotter (which I will share soon) this is my favourite one… the girls were lovely and really played up to the camera. They’re dressed as the Holyhead Harpies, the all girl quidditch team that play in the British and Irish league! I’m now their number 1 supporter… GO HARPIES #hogwarts #hogsmeade #uorblogsquad #universalstudios #universalorlando #universalmoments #universalislandsofadventure #wizarding #wizardingworldofharrypotter #wwohp #harrypotter #quidditch #celebrationofharrypotter #readyforuniversal

A post shared by Orlando Attraction Tickets (@orlandoattractiontickets) on Jan 28, 2018 at 12:07pm PST

Throughout the past five years at these annual Harry Potter celebrations, I’ve seen Harry and Ginny in their Quidditch garb, I’ve seen the Ilvermorny U.S. Quidditch team, but this is the first time I’ve spotted an entire clan of Holyhead Harpies. For those who don’t know, the Holyhead Harpies are an all female Wales Quidditch team that Ginny ends up playing for after she leaves Hogwarts.

These incredible group of ladies deserve credit, so leave a comment below if you know who they are!

Even though Universal routinely has their own clique of Beauxbaton girls to perform their delicate dances, I’m always impressed to see homemade Beauxbaton uniforms. Here we have Cassy Trejo and Tori in their very well-made light blue silk dresses. From the hat to the heels, these girls’ Beauxbaton cosplays are strikingly beautiful.

Okay, but did you read that caption? Brenna Mazzoni seems to encompass Professor Trelawney inside and out. Fortunately, this is only one photo in her brilliant recreation of our favorite Divination professor. Brenna is normally a makeup artist and body painter, but she clearly has a knack for cosplaying as well.

There were so many incredible Lunas at this year’s Celebration, that it was hard to choose just one to show. But I was drawn to Nicolette’s version of Looney Lovegood, and a further look into her page shows an overwhelming amount of cosplay talent. The most noticeable details in her Luna cosplay have to be the tweed jacket and the ever-present Quibbler in hand. Everything about this cosplay is reminiscent of Luna, and I give Nicolette props for embodying this entertaining character.

Fantastic Beasts and Where to Find Them

Love looking at photos from A Celebration of Harry Potter 💫

You may have seen this one already because it’s a photo complete with today’s most inspiring cosplayers. On the left we have House of Phoenix Cosplay who was first noticed on the cosplay scene for his uncanny resemblance to Jacob Kowalski. Next we have Lexie Grace who impersonates Porpentina Goldstein’s facade almost flawlessly. Then we have Alyson Tabbitha who is the queen of cosplay transformations, having expertly transformed into Newt Scamander and all his glory. And on the very right we have Anna Faith,  who should probably be Alison Sudol‘s stand-in in the next Fantastic Beasts  film since she looks exactly like Queenie!

Jackie aka @jabberbird makes a beautiful young Hermione alongside her Ron and Harry cosplayer friends. They represent the golden trio in their final moments after the Battle of Hogwarts in Harry Potter and the Deathly Hallows. From the Extendable Charmed purse to the bloody battle scars, just about every detail is refined in these cosplays.

Fun fact: I chased this couple down all day so I could get a picture with “mom and dad”. Arthur and Molly, you both were perfection! ✨⚡️

And finally, we have the happiest group of Weasley’s you ever did see. This looks like a photo that you would have seen on Ginny’s graduation day at Hogwarts. This photo is courtesy of Jessica Medley who is a Youtuber, Harry Potter fanatic, and true Gryffindor at heart.

Honestly, I’m going to have to stop there because there’s just too many amazing Harry Potter cosplays. And for reference, I cosplayed as J.K. Rowling on Saturday in the dress she wore for the final  Harry Potter premiere. So if you missed the celebration this year, just remember there’s always next year and “Hogwarts will always be there to welcome you home.”

Tag @cosplayandcoffeenews on Instagram to get your Celebration of Harry Potter cosplay featured!

END_OF_DOCUMENT_TOKEN_TO_BE_REPLACED

END_OF_DOCUMENT_TOKEN_TO_BE_REPLACED
We use cookies on our website to give you the most relevant experience by remembering your preferences and repeat visits. By clicking “Accept All”, you consent to the use of ALL the cookies. However, you may visit "Cookie Settings" to provide a controlled consent.
Cookie SettingsAccept Allll The Cookies 🍪
Manage consent