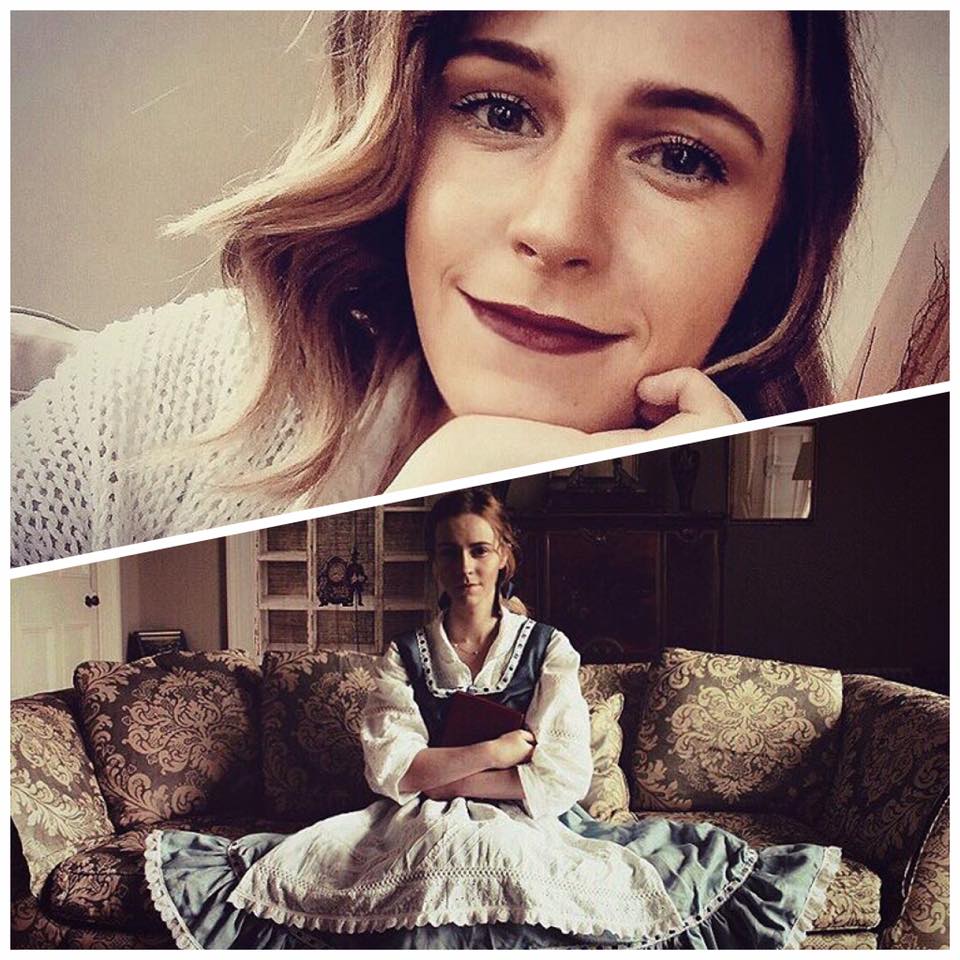 At this point in the year, pretty much the highlight of discussion is the new Beauty and Beast live-action remake starring Emma Watson. We are eagerly awaiting the flood of new Belle and Gaston cosplays (and we see you, cosplay Instagrammers) to show their unique variations our favorite characters from the tale as old as time.

One cosplayer in particular, Megan Flockhart is well-known for being an Emma Watson look-a-like. She’s already ahead of the game, with her unique version of the live-action “peasant Belle” cosplay! We were thrilled and honored to talk to Megan about her viral recognition as a cosplayer (she’s even been noticed by Josh Gad and J.K. Rowling!), especially noting her Hermione and Belle.

Cosplay & Coffee wanted to get to know the real Megan. We talked to her about cosplaying, inspirations, daily life, and she even told us what she thinks of the new Beauty and the Beast!

Cosplay&Coffee:  You have been widely recognized as being an Emma Watson look-a-like. How do you feel about that?

Megan Flockhart: It’s an amazing compliment, it always will be, but sometimes I feel like people now expect me to act and forever resemble her and that’s just not realistic! I’m Megan Flockhart — not Emma Watson. So I act different and I’m not always going to remind people of her. I’ve tried to tap into other cosplays that have no correlation to Emma and I get comments like “no, this isn’t you.”  It’s totally ridiculous! But I mean, it’s a very minor problem I can ignore. All in all, it’s been incredible to be compared to my favourite celebrity!

Cosplay&Coffee: It’s no doubt that you have a lot in common with Watson. Has she always been an inspiration for you?

MF: She has, since I was a child. In ways, she’s really helped shape who I am today because we do seem to (I don’t know her personally so I can’t say for sure, but judging by interviews, etc.) have so much in common.

When I was younger, she inspired me to always take my education seriously and to always be my unapologetic self. Then as I got older, she’s educated me on topics like feminism, sustainable fashion, and so many other issues. I feel like I wouldn’t be as clued up on if it wasn’t for her. I really owe her a massive thank you.

Cosplay&Coffee: Who else would you call your inspiration?

Cosplay&Coffee: In our original article about you (which also appeared on Movie Pilot), we talked about your fight for women. What is your advice to feminists or others who want to make a difference in the world for women? (Also, thoughts on Watson’s HeForShe?)

MF: I think I’d say keep doing what’s right. I talk to a lot of women nowadays that say they are scared of feminism because of how its perceived. It comes with this negative connotation that you’re anti-men when it’s really not the case. Gender is a spectrum; feminism is just about giving every single being equal rights and opportunities no matter what gender or race or sexuality. I absolutely love #HeForShe and how it’s encouraging men to raise their voice as well. I think it’s vital in the progress for gender equality.

Cosplay&Coffee: You’re a fashion blogger. How did you get started doing that?

MF:  I actually had a lookbook.nu account and (at the time; it died a fast death for me a few years after) and it really took off! I felt like I wanted to do more than just post photos of my outfits. I wanted an online portfolio where I was free to be more creative and illustrate who I am.

“She inspired me to always take my education seriously…Then as I got older, she’s educated me on topics like feminism…”

Cosplay&Coffee: Besides cosplaying as Hermione, what other cosplays do you enjoy?

MF: Belle! Ironic enough that Emma is playing her because she was my first favourite princess. I watched Beauty and the Beast so much as a child that my parents still know all the words to the cartoon. But I’m also planning an Ariel cosplay that I’m really really excited about!

Cosplay&Coffee: Do you make your own cosplays?

MF: I don’t make them, but I do buy everything in individually. I had @youngjaneandlittlemeg_in_dland make my Belle dress and it’s absolutely breathtaking!

Cosplay&Coffee: How did you celebrate the Harry Potter movie premieres and the book releases?

MF: Usually by excessively fan-girling to my boyfriend or parents (people who expect me to fan girl) then I’ll re-read one of the books and watch a film!

Cosplay&Coffee: What is a day in the life of Megan Flockhart like?

MF: I’m from Scotland and I’m a student studying International Marketing. Honestly? I have the inner spirit of an 80 year-old, so I genuinely love cosy nights in! Sometimes with a prosecco, sometimes with tea. If it’s a weekend there’s normally prosecco involved though, haha. Other weekends, I’ll go out with friends or my boyfriend who I visit regularly in Manchester.

Cosplay&Coffee: Have you traveled much?

MF: I have! I’m an expat child so over my life I’ve lived in: Scotland, Canada, Abu Dhabi, Australia, and America.

Traveling wise I’ve been all over! My parents loved to travel, so I’ve been many places that I’m forever thankful for. But I’m really keen on visiting Thialand or New Zealand or Rome (I also love historical vacations.I’m a huge history buff)!

Cosplay&Coffee: What movie could you watch over and over again on repeat?

MF: Elf (no matter what season), Titanic (Leo was my first crush ever), Harry Potter (any one), Perks of Being a Wallflower, Love Rosie, Secret Life of Walter Mitty, any Disney film, The Other Guys, Step Brothers….and so many more I’ve forgotten and probably will forget at night!

Cosplay&Coffee: How do you get your morning started? Are you a big coffee drinker?

MF: No, I’m a total tea Jenny! I start my day off with tea, but I’m not a great morning person.

Cosplay&Coffee: Are you excited for the Beauty and the Beast movie? Which scene are you most looking forward to seeing in the remake?

MF: Yes I am! So incredibly excited. Every time I see a clip it’s like I’m a child again! Honestly, I’m not excited for one specific scene, I’m excited to see all of it! I’m so inspired by Emma Watson’s take on Belle,.I applaud her so much because I feel like it does Belle so much justice and it’s so important for young children to see such an independent, unique, open-minded, and strong Disney princess!

Cosplay&Coffee: What Beauty and the Beast cosplays are you doing?

MF: Just Belle, at the moment!

Cosplay&Coffee: Any advice for those who want to make a Beauty and the Beast cosplay?

For more of Megan’s cosplay magic, give her a follow on social media!

Tell Us Who Else You Would Like Us To Interview In The Comments Below!

END_OF_DOCUMENT_TOKEN_TO_BE_REPLACED

END_OF_DOCUMENT_TOKEN_TO_BE_REPLACED
We use cookies on our website to give you the most relevant experience by remembering your preferences and repeat visits. By clicking “Accept All”, you consent to the use of ALL the cookies. However, you may visit "Cookie Settings" to provide a controlled consent.
Cookie SettingsAccept Allll The Cookies 🍪
Manage consent