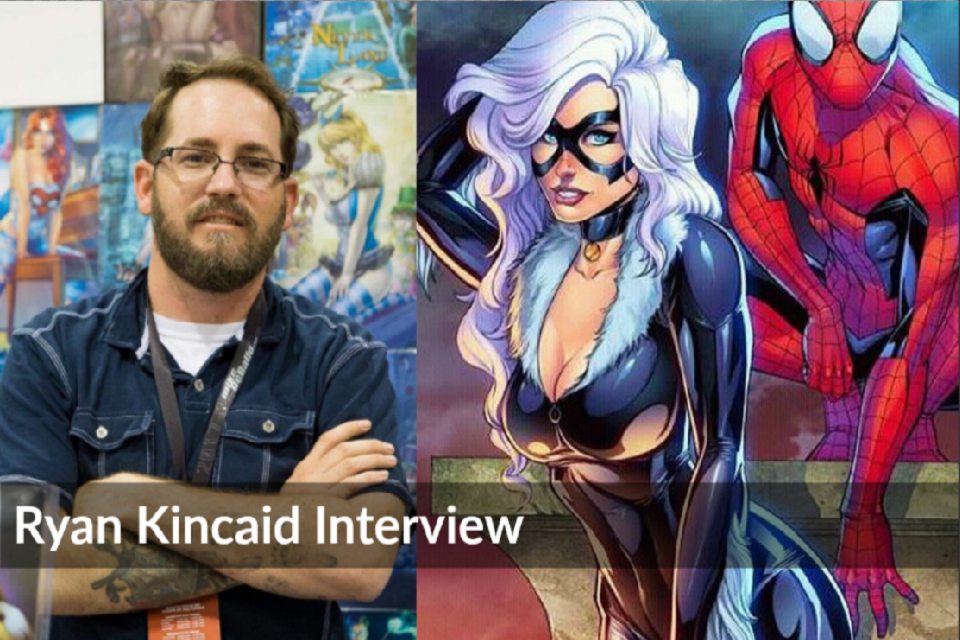 Comic books are a source of non-guilty pleasures for most of us in the cosplay and comic-con community. The stories bestowed upon us from legendary titles such as Marvel and DC are why cosplayers do their best to recreate the iconic characters from those colorful pages and bring them to life. But have you ever wondered about the artists that bring your favorite characters to life?

Ryan Kincaid, a cover artist and illustrator for Zenescope Entertainment, tells us what it’s like to be a comic artist in this exclusive interview!

Thanks to my buddy @jamesstamsekphotography for hooking me up with a couple pictures. I'm not even that cool lol. But the pictures are rad.

Cosplay and Coffee: So you create art for the Zenescope’s Grimm Fairy Tales comic series?

Ryan Kincaid (RK): Yes, I’ve been doing artwork for Zenescope Entertainment for a few years off and on.

C&C: What made you get into this kind of artwork?

RK: It kind of just stumbled upon me. I’ve always liked drawing cartoons and stuff, and I met an artist who said I should do comic books, so I started doing that. And I had a lot of friends who actually worked for Zenescope. One of the editors at the time was Anthony Spay, who’s a friend of mine, and he just kind of contacted me and gave me my first shot at working for him.

C&C: What kind of art do you create for them? Is it just the cover art?

RK: For Zenescope, I do a lot of the interior pinup art, and for other books I do cover art. I haven’t done any interiors for anything else yet, but I’m actually working on one right now. Hopefully that will be out sometime next year.

C&C: What has been your favorite story to illustrate so far?

RK: My favorite so far for Zenescope that I really liked doing this past year– we did a military issue. We did a lot of photoshoot books that was all a tribute to the military.

But my favorite that I’ve illustrated so far is with Counterbook Comics in their book called “Hardlee Thinn” which was a Harley Quinn parody.

C&C: So are you a comic reader?

RK: I am. I haven’t had the chance to read books in some time. I catch ones when I can here and there. The last story I read was years ago,  but lately I’ve been able to pick some issues and go through an issue here and an issue there.

C&C: What has been your favorite character to illustrate so far?

RK: Oh, man. That’s a large list. Robyn Hood is one of my favorite Zenescope characters. And I love doing the Hardlee Thinn character. That one is always fun to do because all of them are homages to great artists and covers throughout time. Those are probably my two favorite things I’ve done so far.

C&C: Have you seen a lot of cosplayers recreate your cover illustrations?

RK: I had actually never seen that until this past year. On Facebook, I saw they actually did recreate one of the cover pinups that I made. It was just, you know, day to day people showing up at a con that were like, “Hey, I made this costume because it’s something that I saw on Pinterest. And I just  saw that you drew it!”

C&C: Is there any certain character or story that you would like to illustrate that you haven’t yet?

RK: Oh, that’s a long list! I’ve got to do some of my bucket list lately. As for Zenescope, I think it would be cool to do an entire issue of Robyn Hood from cover to end. I think she’s just one of my favorite characters. I would love to do one of those books, and I would love to do X-Men.

C&C: What’s your ultimate goal as an artist?

RK: My ultimate is probably like everybody else’s: to be successful enough to continually draw ‘till the day I can’t hold a pencil anymore. I would love to see my own book come out, which I’m working on now at glacier speed. It’s kinda rough to try and fit your own project in between doing everything else to make sure bills are paid. But that’s my goal: to be able to pick and choose who I want to work with at the same time as putting out my own successful creative content.

C&C: I think a lot of people can relate! So is this what you do full time?

RK: This is. I used to work for 12 years running a bar and being a bartender, and I just took the plunge and quit, and moved cross-country and just decided to give it a shot. And it’s just non-stop. It’s rough, but it’s worth it.

C&C: Are there any cosplayers in particular that you would like to see recreate your drawings?

RK: You know, it would be pretty cool to see Rikki Reynolds do some of mine. I know LeAnna Vamp could fit a couple pieces, and so could Jessica Nigri.

RK: I’ll have to go back to the military issue. It was just done this year. You don’t see a lot of things like this that the proceeds go to the military, and they sent books out to them.  I really liked taking their characters and putting them in military scenarios. Like I got to do Dorothy in a Navy outfit and Alice in an Army outfit. Everybody that was involved in that project did a great job and the fact that it benefited the guys in the military was really cool.

I got a couple guys that follow me that are in the military and one of them at the moment was stationed in Quantanoma and he wrote me online and said that he had picked up a couple of the issues to have for him and his buddy. And he was just thanking me for doing the work.

C&C: And what has been your proudest moment as an artist so far?

RK: When Todd McFarin saw one of the pieces I did and was thoroughly impressed. And he signed it for me because it was an homage to him. It was a cool moment.

Only at @amazingcomiccon Hawaii. This show never gets old. In one day this happens and later that day Todd McFarlane comes by my table and has a chat with me. Good times. Thanks to @jdfffn for everything he does for his fans. I saw first hand just how genuine he is to everyone! What a great show

Make sure to give Ryan a follow on social media to see more of his badass artwork:

Join the conversation! What do you think of Ryan’s work? Tell us about it in the comments below!

END_OF_DOCUMENT_TOKEN_TO_BE_REPLACED

END_OF_DOCUMENT_TOKEN_TO_BE_REPLACED
We use cookies on our website to give you the most relevant experience by remembering your preferences and repeat visits. By clicking “Accept All”, you consent to the use of ALL the cookies. However, you may visit "Cookie Settings" to provide a controlled consent.
Cookie SettingsAccept Allll The Cookies 🍪
Manage consent