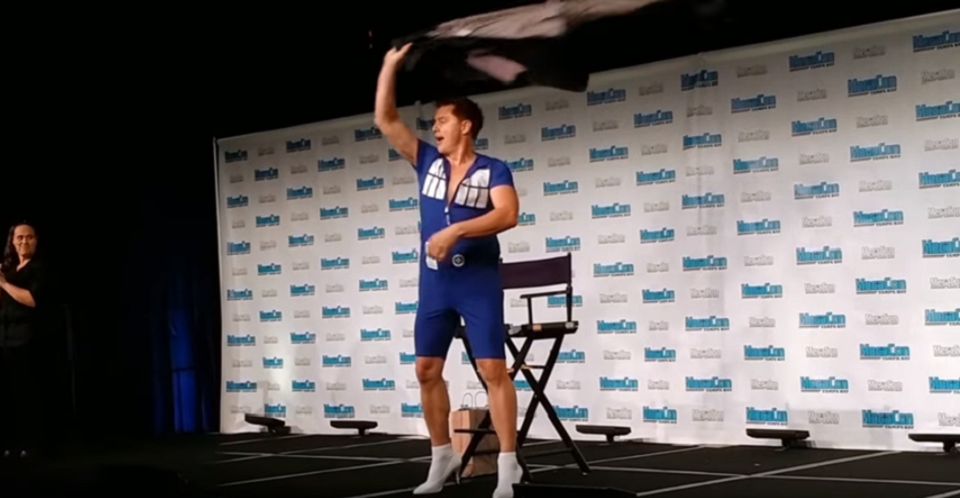 John Barrowman is known for a lot of things. He played the infamous Malcom Merlyn in the CW’s Arrow, and is known for his time as Captain Jack in Doctor Who and the spinoff series Torchwood. But lately, Barrowman is starting to create a name for himself within the comic-con circuit. Convention attendees not only know him to dress up in cosplay, but they are guaranteed to be entertained at his panels. At San Diego Comic Con earlier this year, Barrowman had fans screaming when he entered his panel in a Doctor Who  tutu (a nod to the first ever female Doctor in the series), and he impressed audiences with his Wonder Woman ensemble at Dragon Con just a few months later.

Cosplay and Coffee had the pleasure of attending MegaCon Tampa Bay’s second annual event this year, and at the top of our To-Do list had to be the John Barrowman panel. We didn’t know what to expect, but I can tell you… we were not disappointed.

So without further ado, here are the best moments from John Barrowman’s Tampa Bay Megacon Panel:

Celebrity panels are always a highlight at any convention, but if it’s a John Barrowman panel, you can bet money that he’ll show up in cosplay. He had already impersonated characters like Harley Quinn and Squirrel Girl before his Tardis tutu cosplay came to San Diego Comic-Con this year. And then more recently when he stunned audiences with his bedazzled Wonder Woman jumpsuit at Dragon Con.

At Megacon Tampa Bay, Barrowman decided to bring back a favorite: the Tardis onesie cosplay. Of course, Barrowman jazzed up the cosplay by strip-teasing the onesie under a Captain Jack-inspired trench coat, and paired the entire cosplay with  fabulous white heels. Hopefully his next cosplay will be inspired by Arrow. Perhaps a gender-bent Green Arrow? I volunteer to commission a tutu for him!

3. A New Member of the Family

Dad is in Walmart buying me pee pads – #whatsmyname

When a fan asked Barrowman the very open-ended question, “What’s something you wanted to be asked today?” he stumbled for a minute stating he wanted to stay away from inducing a political rant. In the midst of contemplating, however, Barrowman suddenly screams, “PUPPY!” And to our delight, this adorable little addition to the Barrowman family was introduced to the Megacon Tampa Bay panel.

The puppy was adopted at the Humane Society in Salt Lake City. She jumped right in his lap, and as Barrowman puts it, “She chose me.” He kept her name coveted, telling fans he would reveal her name on social media later that night.  However, we still haven’t seen what her name is!

Congratulations on the new addition!

“Honest to God, it was the best birthday ever.”

One of my favorite pictures from my Birthday party last night. JB

In March of this year, Barrowman had his 50th birthday. While reliving the experience at the panel, he told us with enthusiasm the story behind Stephen Amell’s immaculate birthday surprise for him. After telling Amell that he would turn 50 years old during his time on Arrow, Amell promised him that he would show up to his birthday party in a gold speedo. Barrowman reveals that he typically is on set on his birthdays, but he ran to the producers right away to request the day off!

And low and behold, Amell kept his promise. Having totally forgotten what Amell had promised him years’ earlier, Barrowman is unsuspecting at his  50th celebration. Then his assistant, Kelsey, suddenly whispers to him, “You’re going to love this. Just watch.”

The lights dim, a chorus of ‘Happy Birthday’ fills the room, and out walks his friend Keith and Stephen Amell wearing golden speedos! Kelsey also reported there is video of Keith and Amell changing into said speedos and doing push ups off one another? A video I assume will, unfortunately, never reach the internet. Fortunately, the rest of the story is one the Barrowman loves to recount as he claims, “Honest to God, it was the best birthday ever.” 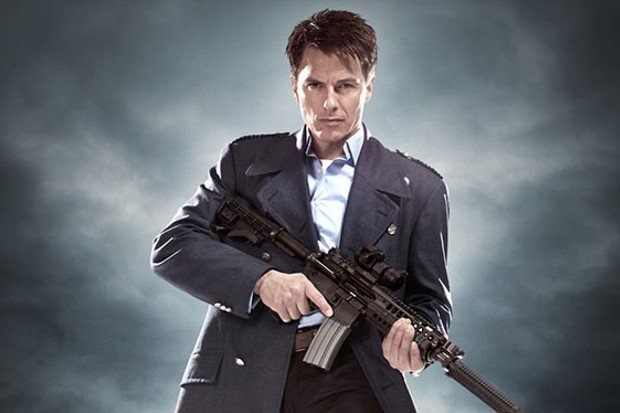 As fans lined up to ask their burning questions, one fan in particular wanted to know if Barrowman has thought of a way to keep his character Captain Jack going after Torchwood‘s final episode ended in 2011. Barrowman admitted that the story, “kind of stopped” but was kept alive in the comics that he writes with his sister. That’s when he dropped the bombshell

“There’s a great new series going to come out with Torchwood. I’m probably saying something out of line, but Kelsey’s not here to  tell me not to say it.”

He then went on to whisper to the crowd:

“There’s a new series coming out with Captain Jack and Captain John.”

Barrowman revealed that the series goes back to when the two lovebirds first met and that fans are going to love it. Hear the full details in the video below!

Nobody tells a story quite as well a Barrowman does. If you’re at a convention and John Barrowman is doing a panel, you need to be first in line. As we said: you will not be disappointed.

What’s your favorite John Barrowman moment? Tell us in the comments below!

END_OF_DOCUMENT_TOKEN_TO_BE_REPLACED

END_OF_DOCUMENT_TOKEN_TO_BE_REPLACED
We use cookies on our website to give you the most relevant experience by remembering your preferences and repeat visits. By clicking “Accept All”, you consent to the use of ALL the cookies. However, you may visit "Cookie Settings" to provide a controlled consent.
Cookie SettingsAccept Allll The Cookies 🍪
Manage consent