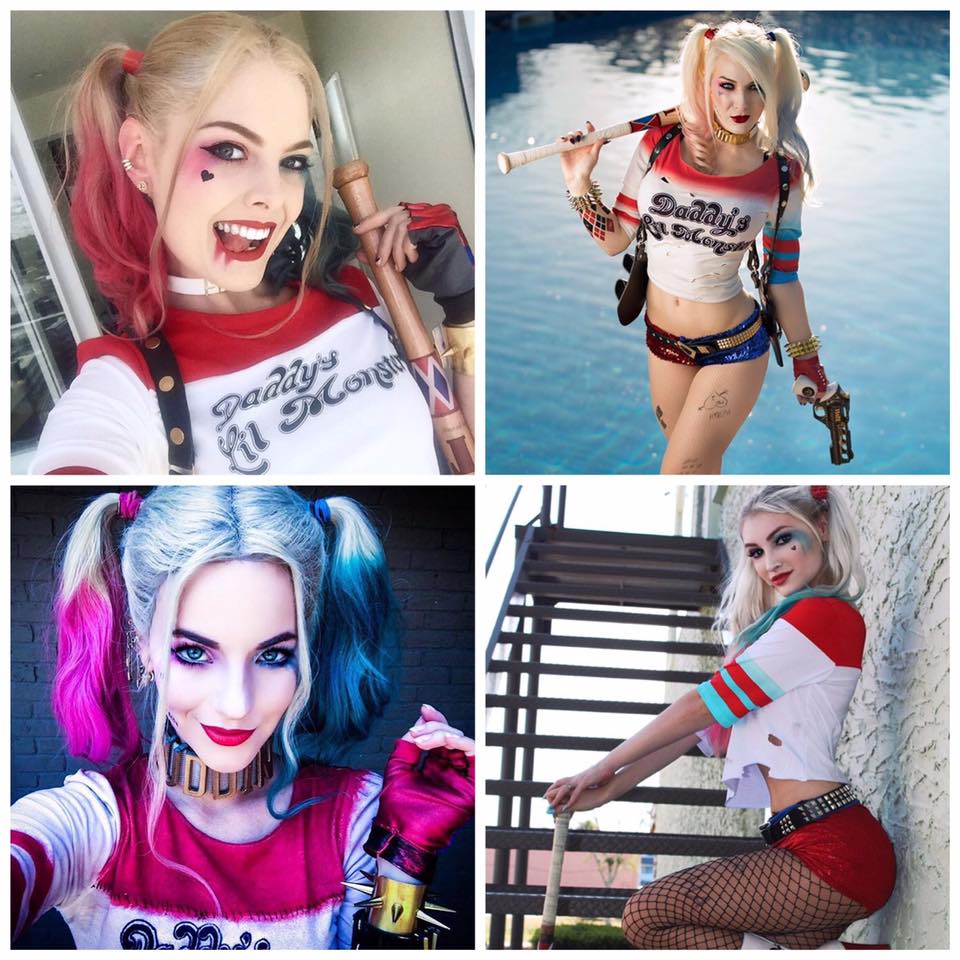 With Suicide Squad breaking the box office (at this time,  an escalating 731 million) and Halloween just around the corner, we found it only prudent to find the best of the best Harley Quinn cosplays on the market. After all we all know what’s coming… 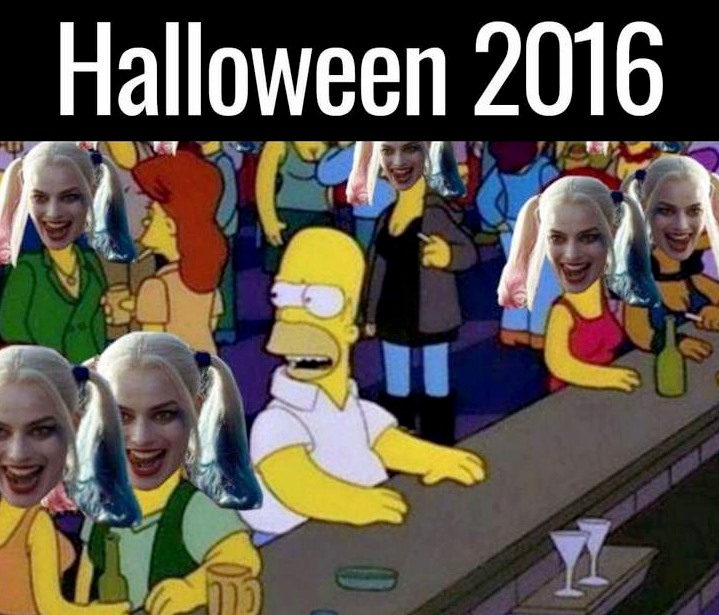 Margot Robbie’s Harley Quinn in Suicide Squad  is a strange leap from the DC character’s original black and red jumpsuit, but it might be safe to say that the look is appreciated and approved by fans everywhere. 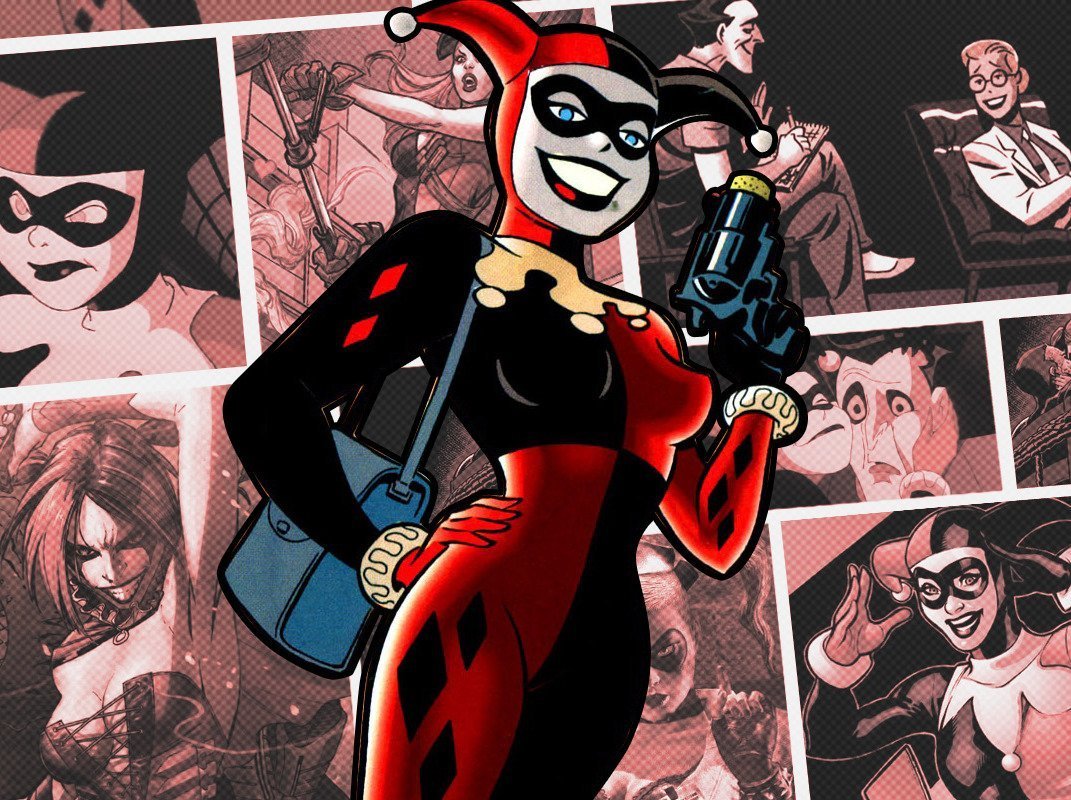 With that being said, the quest to conquer this seemingly effortless, yet chaotic mess of a look is harder than one might think. There’s the intricate earring details, the clown makeup, the tattoos, and the ability to pull off those red and blue shorts. But these cosplayers take the cake for the Top 11 Best Harley Quinns that are out there (so far, at least).

Kamila is known by her cosplay name, Andrasta. She began cosplaying just two years ago and seems to be a natural at it! Andrasta went all out when it came to replicating the tattoos that are plastered all over the Suicide Squad character. Being a makeup maverick also helps, which is why she gets a spot on our Top Harleys.

Whoa, nerd alert! That’s where you can find this awesome Harley Quinn cosplay on Instagram. Like most Quinn impersonators, Cheryl is simply gorgeous, so her DC cosplay seems effortless. However, if you take a look at her photos, you can see how she progressed this Harley cosplay by being as specific as possible to the small details.

She does a pretty mean Joker, too.

This young Californian can be just about any Disney princess, but he also rocks it as Harley Quinn. He brings out each of his characters with eccentric beauty and flawlessness. If there’s one thing that Richard can teach cosplayers, it’s that a wig and a knack for the glamorous can transform you into just about any character you want to be.

With the help of hair legend and stylist, Guy Tang, @SuprMaryFace made this Harley Quinn look fierce! The homemade “Little Monster” t-shirt also goes to show that a little creativity goes a long way. Kudos to her for being crafty!

Mary is an Australian turned Mississippian who cosplays and models. She also makes a pretty sweet Gothic Snow White and runs a Youtube and Twitch channel.

Kristen Hughey’s Quinn look is so on point it landed her on the cover of Cosplay Culture Magazine. She is  (of course) a model and was actually featured in GQ Magazine.  Kristen goes to many a convention, mostly in this accurate Harley Quinn portrayal and is becoming quite the professional cosplayer!

Anna Faith has been known to accurately pull off all of her cosplays, and has been widely recognized by her 700K fans for her Quinn look. She has a couple different takes on the SS  version of Harley, including an everyday look for those who can’t get enough of this crazy character. You can see the comic version of Quinn, along with her other cosplays on her Instagram.

This is one of the most vivacious genderbent cosplays we’ve seen! Chris shows his style in true Harley Quinn fashion, from the bullet belt, the Puddin’ chain, to the suspenders. It’s not specific to the look that’ Robbie declares in the film, but this unique take can only be pulled off with crazy personality.

A Disney princess by day, Tahnee makes a variety of Harley Quinn looks by night. This cosplayer and LA-based actress can take on any HQ look from the latest film. Tahnee doesn’t limit herself to fashioning in just the red and blue action attire. Besides this atypical Suicide Squal style, she also fixed herself up as a Blue Lantern Harley Quinn!

Heidi’s take on the Margot Robbie look is bright, yet dark and mysterious. Notice her attention to detail with the snazzy gold Quinn accesories like the cuffs and the earrings. Heidi makes parody videos on YouTube and even has her own Joker to cosplay with (who also looks exceedingly similar to Jared Leto).

This cosplayer actually got the opportunity that every Harley Quinn fan hopes for. In a costume contest at the Comic-Con, Heidi and her very on Suicide Squad won and had the chance to meet the entire cast of the new film.

So this happened today!!! 🙀 @margotrobbie is without a doubt the kindest, sweetest lady I've ever met! It was such an honor getting to meet her! ❤️❤️❤️ #Sdcc #suicidesquadmovie 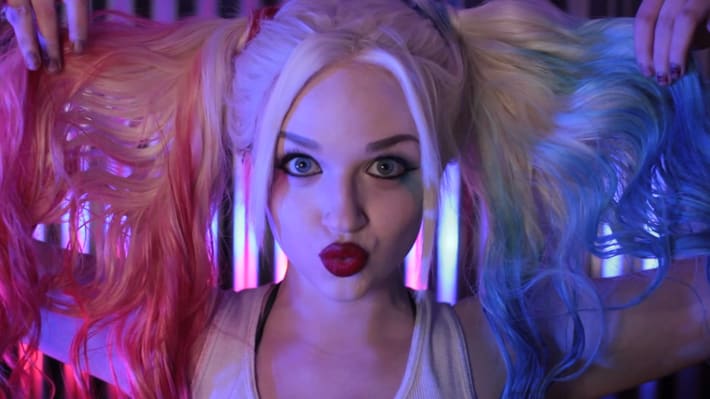 Mykie deserves a spot on our list since she actually fooled tons of Suicide Squad  fans into thinking DC had leaked this official photo from the film.

Mykie is a professional makeup artists who’s talent is beyond anything you will see from your every-day cosplayer. Her social media channels are full of useful tips and tricks which can turn dutiful cosplayer into a work of art.

And our #1 pick for the best Harley Quinn is Laura Gilbert. Laura bares an incredible likeness to Margot Robbie, particularly when she dons the red and blue attire. Her quirky smile and overall demeanor constantly reminds her fans of Robbie in Suicide Squad. She’s puddin’ in a lot of competition for the rest of those who decide to go as the super-villain this Halloween!

Like Robbie, Laura is also Australian. She has become quite good at impersonating the fun-loving, crazy character and makes plenty of appearances at comic cons. You can follow her as the Infamous Harley Quinn on Instagram.

Are these some of the best Harley Quinn cosplays you’ve seen? Tell us in the comments below! 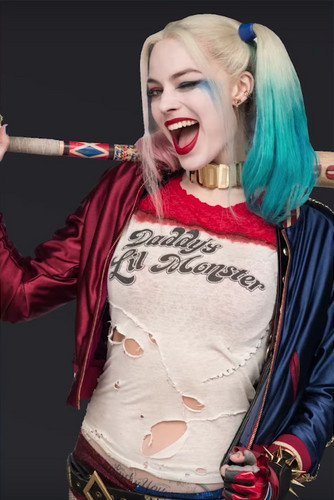 END_OF_DOCUMENT_TOKEN_TO_BE_REPLACED

END_OF_DOCUMENT_TOKEN_TO_BE_REPLACED
We use cookies on our website to give you the most relevant experience by remembering your preferences and repeat visits. By clicking “Accept All”, you consent to the use of ALL the cookies. However, you may visit "Cookie Settings" to provide a controlled consent.
Cookie SettingsAccept Allll The Cookies 🍪
Manage consent