One of the greatest assets of comic-conventions is getting the chance to meet iconic actors who have brought our favorite characters to life. If it weren’t for these idols, cosplayers wouldn’t have the luxury of recreating intricate costumes from legendary characters such as Belle from Beauty and the Beast.  Paige O’Hara, Beauty and the Beast‘s original Belle, is one such actress who has made her rounds to conventions this year. Ms. O’Hara appeared at MegaCon Orlando, Fan Expo Canada, as well as D23 alongside her fellow Disney princesses.

We had the pleasure of speaking with Ms. O’Hara on her role as 1991’s Beauty and got the scoop on her take of the 2017 live-action remake starring Emma Watson, Luke Evans, and Josh Gad (to name of few off the star-studded cast).  In this exclusive interview, Ms. O’Hara filled us in on how she got the role of Belle and what she’s doing with Disney today.

Cosplay and Coffee (C&C): I’ve seen that yourself and some of the other cast from the original Beauty and the Beast  have gone to a lot of conventions. Do you have a ton of great interactions with your life-long fans?

Paige O’Hara (POH): Oh, it’s great. I love it! The reception has been so phenomenal when we go. And I love being able to talk to the fans and hear what their stories are and what the movie meant to them. That’s the most fun of doing the comic-cons is meeting people.

C&C: Is there anything about your personality traits the reflect Belle’s?

POH: You know what, in my career, this is the only role I’ve ever played that was so much like me that it was almost frightening (laughs).  When they were directing me in the film they were saying, “I want more Paige to come through, I want more Paige to come through!” And you know normally, as an actress and as a Broadway actress, you hide behind the characters. But there’s something very vulnerable that—when you have to let yourself come through—who you really are, it was also something that was—very challenging—but also very rewarding. So pretty much every character trait about Belle is like me. To be honest.

C&C: Did you know a lot about her character before you went in?

POH: I sort of knew a little bit before I went in the first couple of auditons. And then when I got to read it, you know, then I was like, “Wow. This is strange. This character is me.” It was an incredible experience.

C&C: How did you react when you found out you got the role?

POH: Oh, it was crazy! I found out sort of by the wrong means because I came home from the morning of the final audition (I did seven of them) and on my voicemail, on my machine (we had the little machines back then), was David Freedman-the conductor- saying, “Paige! We have to get together and set keys for Beauty and the Beast.” And I went, Oh my gosh. That means I got it! Yeha, I was pretty excited. My husband and I, Michael had proposed to me the day before and I got the job the next day and it was my birthday that week… it was quite a week!

C&C: So were you a die-hard Disney fan like so many people are now?

POH: Oh, yes! My entire life. You know, Mary Poppins is my favorite film. I grew up, you know, I watched all of them. And even when I went to New York, pretty much every Saturday I had to go to the Disney movies. Especially when I was struggling in New York, it was sort of my uplifting time to go and do that. And also, I’ve been an animation freak forever. So it’s something that’s been with me forever so this is really a dream come true.

C&C: Is Mary Poppins somebody that you would have liked to play?

POH: Oh yes! You know, like, little girls pretend to be Belle, when I was little I pretended to be Mary Poppins. And then I was so fortunate to be able to meet Julie Andrews. And actually, I was so shy when I met her. We got to talking and we ended up hanging out together at Disney World for a day. It was really amazing.

C&C: My sister is a die-hard Julie Andrews fan. She would be so jealous.

POH: Aw! Well she’s as wonderful, and funny, and classy as you’d think she is.

C&C: In regards to the movie that came out this year (Beauty and the Beast 2017 for future readers), is there anything you would have liked to change at all?

POH: Well, you know, it was all their choices. I wouldn’t have gone quite as dark with the way Gaston is killed. I would have rather seen them do a struggling fight rather than the gun (I’m very much against the guns). But I loved the film for the most part, and I loved Emma. I thought that making her the inventor was brilliant. I loved that idea. And I thought the acting on everyone’s part was really sensational. Dan Stevens is an amazing actor. I was already a fan of his before I saw the film.

Yeah that was the only part I wasn’t thrilled about was the gun shooting. I think they had to make it PG mainly for that scene and the wolf scene. I don’t think you want little tiny kids seeing it– I think the wolf scene would give them nightmares. But it’s a great film. It won the MTV Award for the Best Film and Emma won Best Actress and actually thanked me on her speech, which I was like, floored by.

And Emma’s known to be a bit of a feminist and revolutionary in her own way, and I love that about her.

C&C: You didn’t make a cameo in the movie, did you?

POH: No, I didn’t. I wish I had, I wish I’d played the mom. In retrospect, when I saw it, I was like, “Oh looks like she’s kinda like me.” (laughs). But it’s okay! It was still great to be a part of it and go to the premiere and meet Emma and the cast. It was sensational.

C&C: Speaking of Emma Watson, she’s recently been known to bring sustainable clothing to the red carpet. Do you think that kind of consideration she takes into everyday life is something that is characteristic of Belle?

POH: Oh yes, definitely. Belle was way ahead of her time in terms of, you know, having her own identity. And Emma’s known to be a bit of a feminist and revolutionary in her own way, and I love that about her. I love that she’s a strong young woman. That’s where she’s extremely similar to Belle as well.

POH: You know, I thought they were fine. I thought they were wonderful. It’s not my choice (I prefer the costumes that were drawn from some of the animators). But I thought they worked for her and I thought she was amazing. The little boots and stuff, it made kinda sense that she would run around town in boots rather than little ballet flat slippers. So it was actually very intelligent on her part. And I loved her ballgown, by the way. I thought it was absolutely exquisite.

C&C: Considering you go to conventions where cosplayers recreate costumes that are so iconic to them, do you have a favorite dress or costume from the film?

POH: I love the yellow ballgown. I think it’s stunning. And as an artist, I love painting it as well. Because it is so intricate and so incredibly lovely. And I was really anxious to see the one Emma was going to wear and I love the one the designed for her, too. So I think that’s my favorite costume.

C&C: I actually came across some of your paintings. Do you sell those? 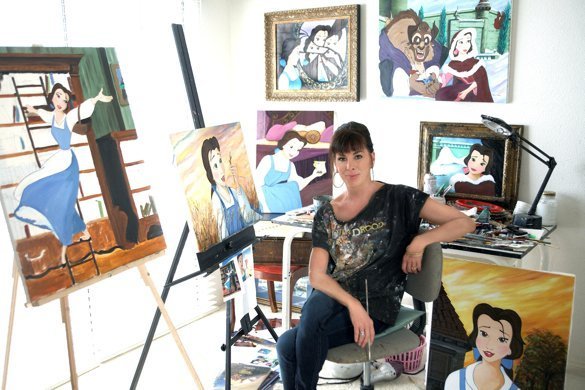 Paige O’Hara working as one of Disney’s Fine Artists

You can see more of Paige O’Hara’s artwork here. The live-action Beauty and the Beast is now streaming live on Netflix as of September 19th, 2017!

END_OF_DOCUMENT_TOKEN_TO_BE_REPLACED

END_OF_DOCUMENT_TOKEN_TO_BE_REPLACED
We use cookies on our website to give you the most relevant experience by remembering your preferences and repeat visits. By clicking “Accept All”, you consent to the use of ALL the cookies. However, you may visit "Cookie Settings" to provide a controlled consent.
Cookie SettingsAccept Allll The Cookies 🍪
Manage consent