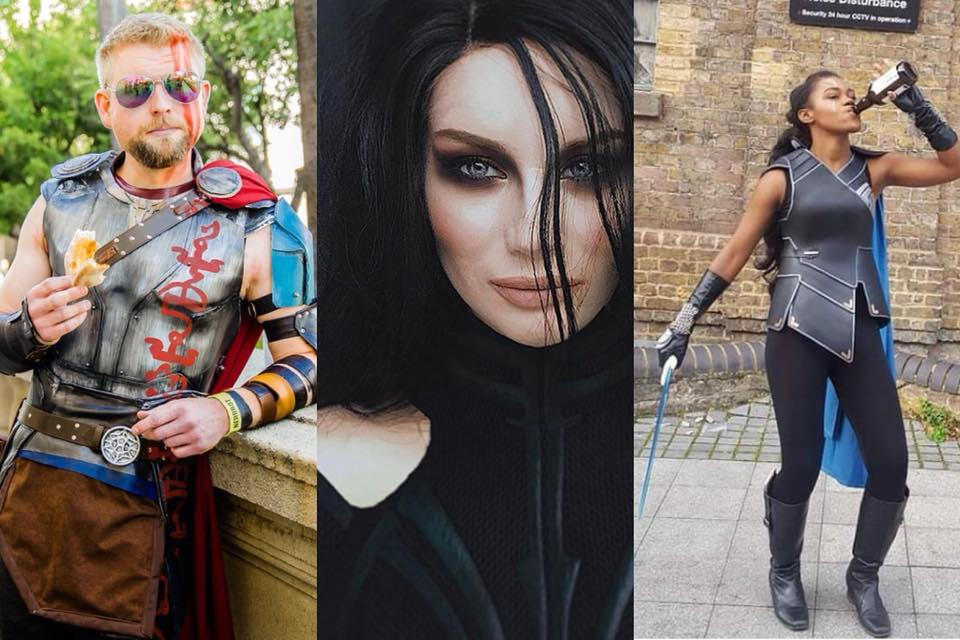 Thor: Ragnarok; the third installment following Marvel’s God of Thunder (or should I say, Lord of Thunder?). Within its first week in theaters, audiences have praised Taika Waititi’s direction, naming it the best Thor film yet.

Along with the Hulk’s further personification and the introduction the Hela (Cate Blanchett), Thor:Ragnarok  released a slough of characters that have inspired cosplayers around the world. For months, they have been prepping to show off their own versions of the Asgardian people with their hand-made costumes. And we have to stay, the cosplay game is strong for this film.

So, to the best of our ability, we have chosen 10 Thor: Ragnarok  cosplays to feast your eyes upon. Some may surprise you, others will make you laugh out loud, but each of these cosplayers’ dedication to the craft is something to be recognized.

Take a look at these 10 God-Like Thor Ragnarok cosplays:

You don’t see a lot of Odin cosplays, but this man did a badass job! There is clearly a lot of attention to detail, and he just pulls off the Odin vibe really well!

I mean, with a name like that, how could we not include them? This young cosplayer has done a couple of versions of Loki’s garb and each of them are spot on. And her Tom Hiddleson drawing is just as good as her cosplays! From the handcrafted props to the Loki roleplays, it’s clear that this cosplayer is going places.

In the end, you will always kneel.

Connor was quick on scene with to replicate Thor’s new look. The rest of his Thor photos are hilariously incredible, not to mention the fact that his work on this character is (again) spot on. You can find him on Instagram @mjolnirsmight chowing down or drinking pitchers of beer.

Because, you know. That’s what heroes do.

Kisa’s impersonation of Valkyrie is probably the best we’ve seen so far. She looks gorgeous in her self-made cosplay, both here and in her traditional Valkyrie armor that she made as well!

We can all agree that this cosplayer’s costume is envious, but those makeup skills?? I don’t know whether to be impressed or scared by her way-too-convincing Hela facade.  Besides being a cosplayer and having an obvious flair for makeup, she’s also a gamer and prop maker.

"I just, I gotta say. I'm proud of you all. This revolution has been a huge success. Yay us! Pat, pat on the back. Pat on the back. Come on. No? Me, too. 'Cause I've been a big part of it. Can't have a revolution without somebody to overthrow! So, ah, you're welcome. And, uh, it's a tie." 10 out of 10 Goldblums for the One and Only Grandmaster! He was better than I expected in Thor: Ragnarok. He was probably my favorite (aside from Korg). I wish I had more chances to wear this costume. Next time I do, I hope there is a DJ table near by. And I cannot wait to call the Thor's I come across as Sparkles :3 Picture by @superjoanjett from #dragoncon2017 #thorragnarok #thorragnarokcosplay #grandmasterthor #grandmaster #jeffgoldblum #marvel #mcu

Honestly, this was just the first Grand Master cosplay that I saw, and I was so blown away, I thought I’d give Jules a round of applause. This cosplay has been a huge success. Yay, Jules! Pat, pat on the back. Pat on the back.

Dominique’s Loki cosplay isn’t new within the cosplay community, but her finesse at handling Loki’s seductive, yet menacing demeanor has to be recognized. Her Loki cosplay is eye-catching, bold, and just downright sexy. Slay, girl.

Naomi did a FANTASTIC job with her rendition of the Valkyrie. This Yorkshire cosplayer may only be 18, but she already has an Esmeralda, Nelliel , and Moana cosplay under her belt!

I must say I didn’t like the new Thor movie… because I LOVED IT!!!! 😍❤️ OMG did you guys see it yet? It was everything I had hoped it would be and more. And Hela! MY GOD, HELA!! Cate Blanchett did such an amazing job at portraying her. I was mesmerized whenever she came on screen. Such talent and poise! I will most likely see it a few hundred times more. What a ride! 🙌👏🙌👏🙌 • • • Photo by the amazing @nels._ • • • Please check out & follow the badass pages I model for: ⭐️ @cosplay.alliance ⭐️ @sharemycosplay ⭐️ @cosplay_connection • • • #hela #cosplay #cosplayer #helacosplay #marvel #marvelcomics #marvelstudios #marvelcosplay #thorragnarok #thor #cosplayfun #cosplaylife #cosplaygirl #cosplaybabe #helagood #cosplayalliance #sharemycosplay #cosplayconnection #cosplayconnectionbabe #cosplayphotography #cosplaying #cateblanchett #goddessofdeath #asgard #asgardian #marvelous #helagoddessofdeath #cosplaymodel #evafoam #thorsday

I have to admit: I am a huge fan of Sylvia. First, from her absolutely gorgeous and recognizable Hippolyta cosplay, and more recently because of her Hela, Goddess of Death, cosplay. This woman is bringing cosplay to the next level, and I honestly cannot wait to see which character she perfects next.

If you haven’t seen this handsome devil yet, Andrew Lutomski is your local version of Chris Hemsworth. Well, local if you’re in Australia. Andrew goes by the name @thorofoz on Instagram. And rather fittingly, since he is obviously a dead-ringer for the God of Thunder.

And just for fun, here is Cosplay and Coffee’s version of Thor, inspired by Mi. This cosplay is super quick and easy. Find out the story behind this DIY here!

Join the conversation! Have you seen any more out of this world Thor cosplayers? Tag them in the comments below!

END_OF_DOCUMENT_TOKEN_TO_BE_REPLACED

END_OF_DOCUMENT_TOKEN_TO_BE_REPLACED
We use cookies on our website to give you the most relevant experience by remembering your preferences and repeat visits. By clicking “Accept All”, you consent to the use of ALL the cookies. However, you may visit "Cookie Settings" to provide a controlled consent.
Cookie SettingsAccept Allll The Cookies 🍪
Manage consent